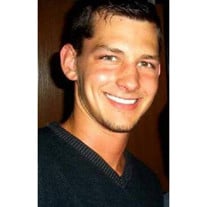 Justin David Moore, age 22, of Grand Rapids and formerly of Cadillac, passed away on October 15, 2012 in Missaukee County. He was born on Dec. 27, 1989 in Evanston, Ill. to David Paul and Patricia J. (Ganster) Moore. His father preceded him in death. Justin graduated from Cadillac High School in 2008. He was a month short of receiving his bachelor degree in Sports Medicine at Ferris State College in Big Rapids. He had also completed a technical course on fixing European specialty bikes at the Wyotech in Ormand Beach, Fla. He was very involved with working with the Ducati motorcycle, and enjoyed snowboarding, snowmobiling, hunting, working on old cars with his grandfather, drawing, playing piano, and anything involved with the out of doors. He held his pilots license and enjoyed flying. He had been employed with Two Men and a Truck at Big Rapids. He is survived by his mother and stepfather, Patricia J. and Mike King of Camden, N.Y. and siblings, Miranda Moore, Caleb King, and Nathaniel King all of Camden, N.Y.; Grandparents, David and Alleen Moore of Cadillac and foster grandparents, Bob and Linda Durant of Cadillac. Uncles and aunts, Byron Ganster of Florida, Robin (Mike) Johnson of Texas and Jamie Ganster of Florida, Laurie Moore (Jason) Bonham) of McBain, Jim (Chris) Moore of Cadillac and cousins, Michaela Moore and David Rick of McBain, John Dery of Cadillac, and Hannah Moore of Cadillac. Also, many other relatives and friends. Private viewing was held at the Burkholder Funeral Home in McBain. Memorial contributions may be made to the funeral home in Justin\'s name to help with expenses. Guestbook is available at www.petersonfh.com.

Justin David Moore, age 22, of Grand Rapids and formerly of Cadillac, passed away on October 15, 2012 in Missaukee County. He was born on Dec. 27, 1989 in Evanston, Ill. to David Paul and Patricia J. (Ganster) Moore. His father preceded him... View Obituary & Service Information

The family of Justin David Moore created this Life Tributes page to make it easy to share your memories.

Send flowers to the Moore family.