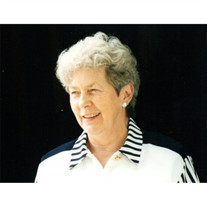 Katherine J. "KayÃ¢â‚¬Â Sundstrom of Cadillac passed away Thursday, July 24, 2014 at Mercy Hospital in Cadillac after a long battle with multiple sclerosis. She was 77. Kay was born August 19, 1936 in Winterfield Township, Clare County, Michigan to George and Alberdena (Buning) Mulder and they preceded her in death. Kay had lived most her life in this area and had worked for Cadillac Area Public Schools as a cook for over 20 years until retiring in 1998. She enjoyed bowling for many years, traveling, camping and bird watching for the past ten years. Kay loved spending time with her family and also enjoyed watching all of the Detroit sports teams. She had been affiliated with the Cadillac Christian Reformed Church and was a breast cancer survivor since 1981. On May 29, 1959 in Vogel Center, Michigan she married Dale G. Sundstrom and he survives her along with their children: Randy (Ann) Sundstrom, Dennis (Laura) Sundstrom, Karyn (Jim) Loeks all of Cadillac and Kimberly White of Caledonia; grandchildren: Joseph Sundstrom, Michael Sundstrom, Gunnar Loeks and Benjamin White; siblings: Harvey (Beverly) Mulder of Falmouth, Melvin (Donna) Mulder of McBain, Bernard (Ruth) Mulder of Hudsonville, Robert (Leah) Mulder of Allendale, Jerry (Judy) Mulder of Lake City, Lois (Marvin) VanHeuvelen of Grandville, Gladys (Ralph) Powney of Hudsonville and Wilma "BillieÃ¢â‚¬Â (James) DeRuiter of Estes Park, Colorado; brother in law, Robert Lucas of Grandville and many nieces and nephews. In addition to her parents she was preceded in death by a sister, Dorothy Lucas and a brother in law, Bruce Feenstra. Funeral services will be held 11:00 a.m. Monday, July 28, 2014 at the Cadillac Christian Reformed Church with Reverend Bert VanAntwerpen officiating. Visitation will be held Sunday from 4-7 p.m. at the Peterson Funeral Home in Cadillac. Burial will be at Maple Hill Cemetery in Cadillac. Memorial contributions may be made to Multiple Sclerosis Society or to the charity of your choice. An online guestbook is available at www.petersonfh.com.

The family of Katherine Sundstrom created this Life Tributes page to make it easy to share your memories.

Send flowers to the Sundstrom family.