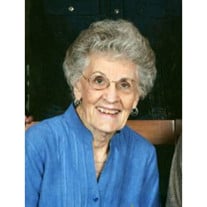 Kathryn J. â€œKayâ€ Loeks, age 85, of McBain went home to be with the Lord on February 9, 2011 at Cadillac Mercy Hospital. She was born in Clam Union Township, Missaukee County, on January 25, 1926 to Edward and Nellie (Spoelma) Hoekwater. She married Henry H. Meyering on Feb. 2, 1945 in Vogel Center, and he preceded her in death on March 4, 1977. On Aug. 7, 1982 she married Harvey Loeks at the home of Bob and Barb Hoekwater in Missaukee County. Kay had sold Avon from 1966 to March 1974 when she became a salesperson for VanDrie Furniture in Cadillac, and she worked for them for more than 17 years. She was a member of the Lucas Christian Reformed Church and had taught Sunday school. She was involved in many community and church activities. She had served on the Missaukee County Board of Canvassers. She enjoyed bowling, playing golf, sewing and baking. She really enjoyed going to her grandchildren\'s ballgames. Survivors include her husband, Harvey Loeks of McBain; children, Karen (Paul) Konczal of Fowlerville, Gail (Ken) Stahl of McBain, Faye (Joe) Walker of Presque Isle, Mary Sanderson (Niel Jendron) of Marquette, Kenneth (Jodi) Meyering of McBain, Deb Dickinson of Hastings, Tim (Gail) Loeks of McBain, Sandy (Tim) Jenema of McBain, and Karen (Bruce) Benthem of McBain; 28 grandchildren; 31 great-grandchildren; one great-great-grandchild; siblings, Harold (Betty) Meyering of McBain, Ed (Edith) Meyering of McBain, Jim (Jane) Meyering of Grand Rapids, Henrietta (Pete) Stahl of McBain, and Barbara Hoekwater of Cadillac; in-laws, Mildred Jenema of Falmouth, Henry Loeks of Grand Rapids, Roger Loeks of Cadillac, and Gary (Rose) Loeks of Iron Mountain; and many nieces and nephews. She was preceded in death by grandchildren, Melissa Boven and Laura Dickinson; son-in-law, Dr. James Sanderson; brother, John A. (Bob) Hoekwater; in-laws, Albert and Alberdeen Meyering, Neal and Elsie Schaaf, Harold Loeks and Marvin Jenema. Funeral services are 11 a.m. Saturday, Febraury 12, at the Lucas Christian Reformed Church, with Rev. Steve VanNoort officiating. Burial will be in Mount View Cemetery in McBain. Visitation is 2 to 4 and 7 to 9 p.m. Friday at the Fellowship Hall at the church. Memorial contributions may be made to Rainbow Farms of Hope, 1951 County Line Road, Kingsley, MI 49649, or to the church building fund. Arrangements were made by the Burkholder Funeral Home in McBain. An online guestbook is available at petersonfh.com.

Kathryn J. â€œKayâ€ Loeks, age 85, of McBain went home to be with the Lord on February 9, 2011 at Cadillac Mercy Hospital. She was born in Clam Union Township, Missaukee County, on January 25, 1926 to Edward and Nellie (Spoelma) Hoekwater.... View Obituary & Service Information

The family of Kathryn J. â€œKayâ€ Loeks created this Life Tributes page to make it easy to share your memories.