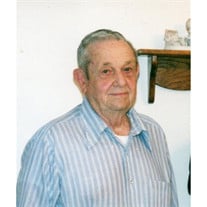 Kenneth Lee Iler of McBain passed away Thursday, August 16, 2012 at Lakeview Lutheran Manor in Cadillac. He was 93. He was born on January 9, 1919 in Owosso, Michigan to Orville and Mildred (Hill) Iler and they preceded him in death. Mr. Iler had lived most his life in the Lucas area. He had served in the United States Army during World War II. He had also farmed and worked as a mechanic. After his mother, Mildred died in 1927; Kenneth and Orville left Detroit and settled on an 80 acre farm in Lucas where they worked together. Kenneth started a Case dealership in McBain and later went to work at Kysor Industrial, later Borg- Warner, in Cadillac for 32 years. He was a very adept as a mechanic and was very proud of the new house he had built in Lucas. On June 22, 1944 he married the former Alice L. Cooley and she survives him along with their children: Carol (Ron) Dykgraaf of Cadillac, Alan Iler of McBain, Dennis (Diane) Iler of Buchanan, MI, Vickie (Larry) Butler of Cadillac, and Kenneth (Janna) Iler of McBain; 8 grandchildren: Glenn (Denise) Dykgraaf, Renee (Brian) Mayle, Laura (Marty) Sluiter, David (Melanie) Iler, Dana (Ashley) Clausen, Derek Iler, Ryan Butler, and Trevor Iler; 10 great grandchildren. In addition to his parents he was preceded in death by a son, Brian D. Iler on Jan. 8, 1958 and a brother, Earl V. Iler. Funeral services will be held 1:30 PM, Monday, August 20, 2012 at Rehoboth Reformed Church in Lucas with Reverend Dave Sterk officiating. Burial will be at Maple hill cemetery in Cadillac with full military rites under the auspices of the Cadillac Area Honor Guard. Friends may meet the family from 4-6 PM Sunday at the Peterson Funeral Home in Cadillac. Memorial contributions may be made to the Disabled American Veterans or Mercy Hospice. An online guestbook is available at www.petersonfh.com.

Kenneth Lee Iler of McBain passed away Thursday, August 16, 2012 at Lakeview Lutheran Manor in Cadillac. He was 93. He was born on January 9, 1919 in Owosso, Michigan to Orville and Mildred (Hill) Iler and they preceded him in death. Mr. Iler... View Obituary & Service Information

The family of Kenneth Lee Iler created this Life Tributes page to make it easy to share your memories.

Send flowers to the Iler family.