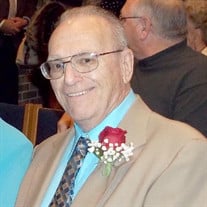 Lawrence Matthew "JitterbugÃ¢â‚¬Â Bruno, of Cadillac, passed away Tuesday evening, September 10, 2013, at his home. He was 74. He was born September 12, 1938, in Weirton, W.Va., to Tony and Anna (Sousa) Bruno, and they preceded him in death. Mr. Bruno had lived in Manton since 1998. He was a member of St. Ann Catholic Church in Cadillac and Boilermakers Local No. 169. He was also a member of the NRA and enjoyed model trains, hunting and was a history and cowboy enthusiast. On November 10, 2012, in Cadillac, he married the former Jeanne M. Pamerleau Dosch, and she survives him, along with his children: Richard (Lori) Bruno of Manton, Marcella (Art) Moss of Grand Blanc, and Kimberly (David) Kenney of Ypsilanti Township; stepchildren: Christeena (Rick) Pershall of Arkansas, Michelle Latty of Missouri, and Christopher Dosch of Maryland; five grandchildren: Ryan Bruno, Erica Bruno, Alexandra Kenney, Ethan Kenney and Chelsea Bruno; two great-grandchildren, Kaiden Bruno and Max Bruno; 10 step-grandchildren; six step-great-grandchildren; and a sister, Mary Stump of West Virginia. In addition to his parents, he was preceded in death by his first wife, Clara Bruno, on August 3, 2011; a brother, John Bruno; and a brother-in-law, Ralph Stump. A memorial mass will be held 11 a.m. Monday, September 16, 2013, at St. Ann Catholic Church in Cadillac, with Monsignor Francis Murphy as celebrant. Friends may meet the family one hour prior to the service at the church. His final resting place will be Cherry Grove Township Cemetery in Wexford County. In lieu of flowers, memorial contributions may be made to St. Jude's Children's Hospital or Mercy Hospice. Arrangements were made by the Peterson Funeral Home in Cadillac. An online guest book is available at www.petersonfh.com.

Lawrence Matthew "JitterbugÃ¢â‚¬Â Bruno, of Cadillac, passed away Tuesday evening, September 10, 2013, at his home. He was 74. He was born September 12, 1938, in Weirton, W.Va., to Tony and Anna (Sousa) Bruno, and they preceded him in death. Mr.... View Obituary & Service Information

The family of Lawrence Matthew "Jitterbug" Bruno created this Life Tributes page to make it easy to share your memories.