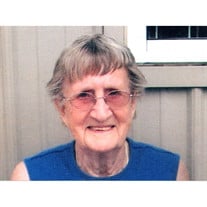 Leota B. â€œPugâ€ Cornell of Cadillac died Thursday evening, June 7, 2012 at Autumnwood of McBain. She was 82. She was born June 1, 1930 in Manton to John M & Eunice (Salisbury) Falor and they preceded her in death. On April 30, 1946 in Cadillac she married Harold S. Cornell and he preceded her in death on January 8, 1992. Leota had been employed at BF Goodrich from 1949 to 1952 from 1952 to 1964 she worked for Lamb & Co. and then from 1978 until 1995 she worked at Mercy Hospital when she retired. After she retired she sold Avon for many years, she enjoyed sewing and was the 4H leader for sewing, making clothes for kids, flowers, vegetable gardens, traveling, camping, hunting, and spending time with her grandchildren and great grandchildren. She was a Den mother for Cub Scouts and was a member of Temple Hill Baptist Church in Cadillac. Survivors include her children: Carin (Sosenko) (Cyrus) Ecker, Larry (Linda) Cornell and Calvin Cornell all of Cadillac, and Don Cornell of Mesick; 16 grandchildren; 21 great grandchildren; 5 great -great grandchildren; a brother, Mervin â€œBudâ€ (Wilma) Falor of Dewitt; 2 sisters: Dorine Lattimer of Cadillac and Mary Lou Ervans of Midland; sisters in law: JoAnn Sanscrainte of Hamilton and Janette Cornell of Cadillac; brother- in-law, Russell Marshall and many nieces and nephews. In addition to her parents and husband she was preceded in death by a grandson, Bradley John Cornell, brother and sisters: Leona and Pauline Falor, Evelyn Clark, Florine Morrow and Raymond Falor. Funeral services will be held 11:00 AM Tuesday, June 12, 2012 at the Peterson Funeral Home in Cadillac with Reverend David Roose officiating. Burial will be at Maple Hill Cemetery in Cadillac. Friends may meet the family from 5-7 PM Monday at the funeral home. Memorial contributions may be made to the National Multiple Sclerosis Society or the family. An online guestbook is available at www.petersonfh.com.

Leota B. â€œPugâ€ Cornell of Cadillac died Thursday evening, June 7, 2012 at Autumnwood of McBain. She was 82. She was born June 1, 1930 in Manton to John M & Eunice (Salisbury) Falor and they preceded her in death. On April 30, 1946 in Cadillac... View Obituary & Service Information

The family of Leota B. â€œPugâ€ Cornell created this Life Tributes page to make it easy to share your memories.