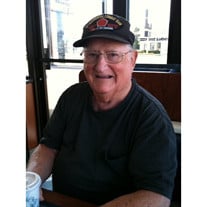 Louis J. Richardson, of Cadillac, passed away Monday, December 23, 2013, at The Lakeview in Cadillac. He was 81. He was born on April 26, 1932, in Inkster, to Ernest P. and Clara C. (McShane) Richardson, and they preceded him in death. Lou married the former Shirley Mae Jones, and they were married for 32 years. He later married the former Nancy Ann Otto on May 18, 1985, and she preceded him in death on January 13, 2007. Lou was a veteran of the United States Army, serving in the Korean War as a combat medic. He had been employed as an insurance planner for many years. Mr. Richardson was a founding member of the Cadillac Area Honor Guard, American Legion Post No. 94, AMVETS Post No. 110 and the VFW Post No. 6864. He had served as the area director and coach for Special Olympics and was a volunteer for 4-H. On July 21, 2007, Lou married Patricia Ann (Truitt) Boyer, and she survives him, along with his children: Louis J. Richardson Jr. of Cadillac, Constance (Tony) Rodriguez of Westland, Cheryl Richardson of Richmond, Va., and Christine (Gregory) Schmidt of Swartz Creek; six grandchildren and two great-grandchildren; stepchildren: Deborah (Bryan) Winn Jr. of Otsego, and Bruce (Gerry) Boyer of North Carolina; four step-grandchildren and five step-great-grandchildren. In addition to his parents and wife, he was preceded in death by a son, David P. Richardson, and a sister, Elizabeth Bondie, and three brothers: Earl, Gordon and Bernard "RustyÃ¢â‚¬Â Richardson. Funeral services will be held at 10:30 a.m. Friday, December 27, 2013, at the Revival Center of Cadillac, with Pastor Will Markham and Pastor Joe Schichtel officiating, and full military rites under the auspices of the Cadillac Area Honor Guard. Burial will be at Burdell Township Cemetery in Tustin. Friends may meet the family from 4 to 7 p.m. Thursday, December 26, 2013, at the Peterson Funeral Home in Cadillac. Memorial contributions may be made to Revival Center of Cadillac Bible Quiz Team. An online guest book is available at www.petersonfh.com.

Louis J. Richardson, of Cadillac, passed away Monday, December 23, 2013, at The Lakeview in Cadillac. He was 81. He was born on April 26, 1932, in Inkster, to Ernest P. and Clara C. (McShane) Richardson, and they preceded him in death. Lou... View Obituary & Service Information

The family of Louis J. Richardson created this Life Tributes page to make it easy to share your memories.

Send flowers to the Richardson family.