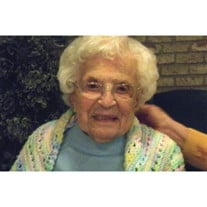 Lucia K. Cawley of Cadillac passed away Thursday, September 1, 2011 at Mercy Hospital in Cadillac. She was 100. She was born October 26, 1910 to Joseph and Louise (Gardella) Casabianca in Grand Rapids. She married James Francis Cawley in October of 1941 in Palm Springs, California at Our Lady of Solitude Church, and he preceded her in death on September 14, 1970. Lucia had attended McKinley Elementary School and graduated from Cadillac High School. After high school she attended St. Mary\'s College of Notre Dame in South Bend, Indiana. She had been a dental assistant to Dr. Westmes, D.D.S and a substitute teacher at St. Ann Catholic School in Cadillac. Lucia was a winter resident of Tucson, Arizona from 1979 to 2006. She is survived by her nieces, Dorothy (Ray) Hathaway of Salem, Oregon, Judith (Robert) Houseworth of Goodrich, Michigan, Mary Lynn (James) McDonnell of Madison, Wisconsin; nephew, Reverend Father Patrick Cawley of Vanderbilt, Michigan; cousin, Margaret (Les) Larsen of Cadillac and special friends: Mariette Potvin, Kay Nicholas and Mary Sue (Curtis) Martin all of Cadillac. In addition to her husband, Lucia was preceded in death by her sister, Louise â€œBabeâ€ Heuss; a niece, Lou Ann Heuss and a nephew, James Cawley . The Mass of Christian Burial will be held 11:00 a.m. Friday, September 23, 2011at St. Ann Catholic Church in Cadillac with Reverend Fr. Francis J. Murphy as celebrant. Visitation will be prior to the mass. Burial will take place at Mount Carmel Cemetery in Cadillac. Memorial contributions may be made to Michigan Right to Life or Mercy Hospice. Arrangements were made by the Peterson Funeral Home in Cadillac. An online guestbook is available at www.petersonfh.com.

Lucia K. Cawley of Cadillac passed away Thursday, September 1, 2011 at Mercy Hospital in Cadillac. She was 100. She was born October 26, 1910 to Joseph and Louise (Gardella) Casabianca in Grand Rapids. She married James Francis Cawley in October... View Obituary & Service Information

The family of Lucia K. Cawley created this Life Tributes page to make it easy to share your memories.

Send flowers to the Cawley family.