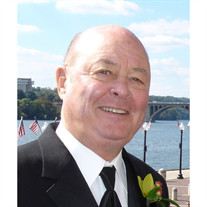 Lynn Gregg Johnson, 77, passed away Sunday, August 12, 2012 surrounded by his loving family. He was born in Cadillac on January 13, 1935, to Herbert C. and Ruth M. (Gregg) Johnson. Lynn graduated from Cadillac High School in 1953 and received a Bachelor of Science degree in Restaurant and Hotel Management from Michigan State University in 1957. Soon after college until 1963, Lynn served in the Army National Guard of Michigan. He married his high school sweetheart, Barbara-Jo Elaine Lillie, on July 6, 1958 in Cadillac. As a young man, Lynn played hockey for the Cadillac Comets. He was a long-time captain in the Cadillac Men\'s Hockey League and coached his sons\' youth hockey teams. Lynn was a life-long skier and an active member of the National Ski Patrol. He loved the outdoors, enjoyed walking on his property, and found beauty in all that nature offers. A favorite spot was Johnny\'s Wild Game and Fish Park, a private petting zoo established by his father in 1964. Each fall he eagerly awaited the camaraderie of deer camp, fondly referred to as â€œMichigan Association of Swedish Hunters.â€ One of Lynn\'s greatest passions was trout fishing with his grandsons in the headwaters of the Pine River in his front yard. Lynn had a unique way of connecting with people, making all who knew him adore him. He owned Johnny\'s Restaurant and managed food service at both Big M and Caberfae ski areas. Many remember his warm smile behind the counter at Cadillac Industrial Supply. Lynn remained active in Zion Lutheran Church where he was a life member. For the last 57 years, he has been a member of the Elks Club. A selfless and exceptionally supportive husband, he was considered by some to be an honorary member of the Cadillac Garden Club and together with them worked on establishing the Sundial Project at the Sound Garden in Cadillac. Lynn is survived by his wife Barbara-Jo and children, Brian (Sherry) Johnson of Cadillac, Mark (Maureen) Johnson of Arlington, Virginia, and Julia (David) Barresi of Traverse City. He adored his grandchildren, Zachary, Lucas (Nicole), Joshua, Nicholas, and Cullen. He is also survived by his brother Keith (Leanna) Johnson of Cadillac and sister Linda (Clayton) Mikowski of Traverse City. A memorial service will be held at 11:00 a.m. on Saturday, September 1, at Zion Lutheran Church in Cadillac with Reverend Scott Torkko officiating. Visitation will be from 5:00 to 7:00 p.m., Friday, August 31, at the Peterson Funeral Home in Cadillac. His final resting place will be Maple Hill Cemetery in Cadillac. Memorial contributions may be made to Zion Lutheran Church or to the City of Cadillac, 200 Lake St, Cadillac 49601 for the Cadillac Sundial Project.

Lynn Gregg Johnson, 77, passed away Sunday, August 12, 2012 surrounded by his loving family. He was born in Cadillac on January 13, 1935, to Herbert C. and Ruth M. (Gregg) Johnson. Lynn graduated from Cadillac High School in 1953 and received... View Obituary & Service Information

The family of Lynn Gregg Johnson created this Life Tributes page to make it easy to share your memories.

Send flowers to the Johnson family.