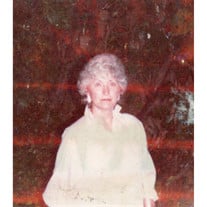 Mabel Vera Langworthy of LeRoy died on April 30, 2012 at Lakeview Lutheran Manor in Cadillac. She was 77. She was born on January 24, 1935, to Herbert and Melissa (Davis) Mowrey of Boon and attended Mesick Consolidated Schools. Mabel married Morris Dwight Langworthy on January 31, 1953. Together, Mabel and Morris raised six children in the Tustin and LeRoy areas. Mabel was known by many for her uncanny knack at making any plant grow, her quick wit and grace, however, Mabel was a poet. She had the ability to write about the beauty and glory of things she saw, in only the way a poet could, and was recognized for her writings. In 1995, Mabel received national acclaim for her poem â€œThe Novice Seekerâ€ by the National Library of Poetry in Washington, D.C. as one of the best poems written that year. However, the poems she cherished the most, were those written for her family and will probably remain unpublished. Mrs. Langworthy is survived by her husband Morris and six children: Morris (Deb) Langworthy , Jr. of LeRoy, Jeanne Langworthy of Marrietta, GA, Shelly (Robert) Baldwin of LeRoy, Teresa Langworthy and Matt Koziel of Tustin, Kenneth Langworthy of LeRoy, and Tracy Langworthy of LeRoy as well as 10 grandchildren and 2 great grandchildren. In addition to her parents, Mabel was preceded in death by her sisters Katie Mowrey, Ruth Mowrey, Elaine Galvin, Maxine Welch, her brother Herbert Mowrey Jr., and brother -in- law Lee Langworthy. Cremation has taken place, and Mabel requested a private gathering be held by her immediate family. In lieu of flowers, Mabel requested contributions be made to The Arthritis Foundation in her honor. Arrangements were made by the Peterson Funeral Home in Cadillac. An online guestbook is available at www.petersonfh.com.

Mabel Vera Langworthy of LeRoy died on April 30, 2012 at Lakeview Lutheran Manor in Cadillac. She was 77. She was born on January 24, 1935, to Herbert and Melissa (Davis) Mowrey of Boon and attended Mesick Consolidated Schools. Mabel married... View Obituary & Service Information

The family of Mabel Vera Langworthy created this Life Tributes page to make it easy to share your memories.

Send flowers to the Langworthy family.