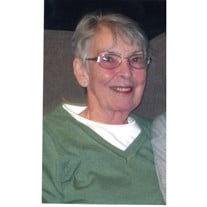 Mable M. Jenema, of Cadillac, died Tuesday evening, March 6, 2012, at her home. She was 80. Mable was born in Cadillac on February 23, 1932, to Murle E. and Mary J. (Wilson) Flint, and they preceded her in death. On October 30, 1953, in Falmouth, she married Merlin K. Jenema, and he preceded her in death on February 27, 1983. She graduated from Cadillac High School in 1950 and had been employed at the H.L. Green Store, B.F. Goodrich and Michigan Bell Telephone. Mable enjoyed bowling, knitting, gardening and walking. She was a member of the Cadillac Christian Reformed Church, the Keenagers and Golden Hour of the Church. Mable was also a member of the Telephone Pioneers and TOPS. Survivors include her children: Gregory Jenema of Falmouth, Thomas (Traci) Jenema, and Barbara (Robert) Hoblet, all of Cadillac; seven grandchildren, Jason (Lynn) Jenema, Nathon and Ryan Jenema, Meagan and Eric Hoblet and Vincent and Sarah Jenema; a brother, Robert (Pam) Flint of Newaygo; three sisters: Marjory (Clark) Hamilton of Cadillac, Mary Emory of Boon, and Marilyn (Norris) Miller of Sears; in-Laws: Patricia McMahon of Cadillac, Russell Armstead of Dearborn Heights, Bonnie Veddler of McBain, Genevieve Jenema of Falmouth, Evelyn Jenema of Grand Rapids, and Don Meekhof of McBain; special friend, Vern Johnson of Cadillac; and many nieces and nephews. In addition to her parents and husband, she was preceded in death by a daughter, Sandra Jenema; four sisters, Lorraine Flint, Maxine Flint, Millie Armstead and Sharon Wetherell; and a brother, Murle Flint. Funeral services will be held 11 a.m. Monday, March 12, 2012, at the Cadillac Christian Reformed Church, with the Rev. Brian Seifert officiating. Burial will be at Maple Hill Cemetery in Cadillac. Friends may meet the family from 5 to 7 p.m. Saturday, March 10, 2012, and 2 to 4 and 6 to 8 p.m. Sunday, March 11, at the Peterson Funeral Home in Cadillac. Memorial contributions may be made to VBS at the Cadillac CRC. An online guestbook is available at www.petersonfh.com.

The family of Mable M. Jenema created this Life Tributes page to make it easy to share your memories.

Send flowers to the Jenema family.