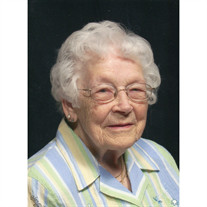 Margaret Keen Lake of Marion went to be with her Lord Monday evening, January 10, 2011 at Highland Hills Adult Foster Care Home in Marion. She was 94. She was born on July 18, 1916 in Marion to Ben G. & Anna (Rozeveld) Brinks. On April 7, 1939 she married John Keen, Jr. and he preceded her in death on May 29, 1990. She later married Hersel Lake in July of 1997 and he preceded her in death on July 15, 2009. Margaret had been employed at the Heinz Pickle Factory in Holland, Michigan the Welcome Inn in Hamilton, Michigan and the moved to Grand Rapids where she and her husband John owned and operated a service station. In 1950 they moved to Highland Township and owned and operated the General Store there while also working at BF Goodrich and later doing house cleaning in the Cadillac area. She was a Member of Highland Christian Reformed Church and was active in the Ladies Aide and Lydia Circle. Margaret had also been active in the Marion Lunch Room baking pies for the sale. She will be remembered as the person that was always there to care for someone that needed help and as strong supporter of the NMC Booster Club. Margaret loved to sing with her brother, she enjoyed crocheting, baking, cooking and had made quilts for each of her grandchildren. Survivors include her Children: Barbara (Roger) VanderTuuk of Jenison, Jerry (Marlys) Keen of Wichita, KS, Robert (Betty) Keen of McBain, Stanley (Karol) Keen of Wyoming and James (Diana) Keen of McBain; 15 grandchildren; 28 great grandchildren; one great-great grandson; 7 step great grandchildren; brother, Bert Brinks of Cadillac; sister, Greeta (James) Keen of Hudsonville; sisters-in-law, Julia (Ted) Medema of Wisconsin and Nellene Keen of Holland; brother-in-law, Marvin Wabeke of Holland. In addition to her husbands she was preceded in death by 2 sisters: Laura Talsma and Agnes Miller, 5 brothers: Ed, George, Ralph, Joe, and Ben Brinks, and an infant son in 1952. Funeral services will be held 11:00 AM Friday, January 14, 2011 at the Highland Christian Reformed Church in Marion with Reverend Keith Mannes officiating. Burial will be at the Highland Hillside Cemetery in Osceola County. Friends may meet the family Thursday from 2-4 & 7-9 PM at the Burkholder Funeral Home in McBain. Memorial contributions may be made to Northern Michigan Christian School or Highland Christian Reformed Church.

The family of Margaret Keen Lake created this Life Tributes page to make it easy to share your memories.

Margaret Keen Lake of Marion went to be with her Lord Monday...

Send flowers to the Lake family.