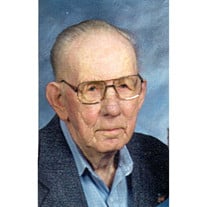 Merlin Rudolph "RedÃ¢â‚¬Â Anderson of Cadillac passed away Saturday afternoon, February 9, 2013 at the Lakeview in Cadillac. He was 90. Red was born September 1, 1922 in Battle Creek to Arthur E. and Sara A. (Lundin) Anderson. Red graduated from Tustin High School and had lived in the area all his life. He was a World War II veteran, serving in the Army Air Corp. He had participated in CCC camps before WWII. Red was the manager of the Cadillac CO-OP for 23 years. He served on the school board as both a member as well as president. He was also involved in the Wexford County Zoning Commission as well as the Road Commission. He served on the Northern District Fair Board in various positions and was very involved in the parks and recreation in Wexford County; helping start up the Wexford Civic Arena. Red was very interested in logging history and had donated relics to the museum. Red felt strongly about the community and youth of the area. He enjoyed racing go carts. He was a life member of Zion Lutheran Church in Cadillac and had served on the church board there. On August 9, 1946 in Cadillac he married the former Ruth VanVieren and she preceded him in death on July 17, 1980. He later married the former Wilma (Rice) Fisher and she survives him along his children; John (Sue) Anderson of Cadillac, David (Cheri) Anderson of Coldwater, Paula Campbell of Cadillac and Sandy (Tom) Duddles of Florida; Nine Grandchildren; 16 great grandchildren; step children: Tom (Kathy) Fisher of Tustin and Mary (Clarence) Ruff of Albion; 5 step grandchildren; many step great grandchildren and sister in law Gloria Anderson of Pennsylvania. He was preceded in death by his parents; his first wife, Ruth; two sisters, Shirley and Cleo Anderson; a brother, Melburn Anderson and son in law, Don Campbell. Funeral services and full military honors will be held 11:00 a.m. Friday, February 15, 2013 at Zion Lutheran Church in Cadillac with Reverend Scott Torkko officiating. Friends may meet the family Thursday at the Peterson Funeral Home in Cadillac from 5-7 p.m. Burial will be at Maple Hill Cemetery in Cadillac. Memorial contributions may be made to Zion Lutheran Church. An online guestbook is available at www.petersonfh.com.

Merlin Rudolph "RedÃ¢â‚¬Â Anderson of Cadillac passed away Saturday afternoon, February 9, 2013 at the Lakeview in Cadillac. He was 90. Red was born September 1, 1922 in Battle Creek to Arthur E. and Sara A. (Lundin) Anderson. Red graduated... View Obituary & Service Information

The family of Merlin Rudolph "Red" Anderson created this Life Tributes page to make it easy to share your memories.