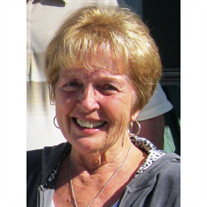 Mildred Joy (Coppernoll) Forsberg passed away surrounded by her family on May 14 at her home near Tustin, MI. She was 82. Mildred (Midge) was born on a farm near Grass Lake, MI, and graduated high school in Napoleon. Midge attended community college in bookkeeping and office procedures. She worked at Howard Sober and Sparrow Hospital of Lansing, MI, for a number of years. She married Donald Depweg of Grass Lake in 1951. In their 12 years of marriage they had a daughter, Peggy, and two sons, Donald and Steven. Her husband Donald passed away suddenly in 1963. Midge met and married Jack Forsberg and had a son, John Forsberg. They lived for more than 40 years on the Looking Glass River near Grand Ledge. In 1971, Midge and Jack started Forsberg Advertising. Midge worked as the bookkeeper, trained all office employees at the agency and as the company grew, became comptroller of the company as well as final editor of all printed materials until she and Jack retired after 40 years in business. Jack and Midge retired and moved to the log home they built on the Pine River west of Tustin, MI. After retirement, Midge edited and produced three books for her husband and a poetry book for her brother-in-law, Terry Forsberg of Lansing. Midge became close friends with many of the members of Augustana Lutheran Church in Tustin, and was always happy to have their heart-felt support during her cancer and recent illness. Spending their winters in Florida, her last wish was to return to her home, family and friends in Tustin. She is survived by her husband of 48 years, Jack Forsberg; daughter Peggy Shinn of Traverse City, MI; sons Donald Depweg of Durango, CO; Steven Depweg of Las Vegas, NV, and John (Morgan Jarema) Forsberg of Lowell, MI; six grandchildren and nine great grandchildren. Funeral services will be held 11:00 am Tuesday, May 20, 2014 at the Augustana Lutheran Church in Tustin with Pastor Michael Holman, S.A.M. and Reverend James Friesner officiating. Burial will be at Burdell Township Cemetery in Tustin. Friends may meet the family from 4-7pm Monday at the Peterson Funeral Home in Cadillac. Memorial contributions may be made to Augustana Lutheran Church. An online guestbook is available at www.petersonfh.com.

Mildred Joy (Coppernoll) Forsberg passed away surrounded by her family on May 14 at her home near Tustin, MI. She was 82. Mildred (Midge) was born on a farm near Grass Lake, MI, and graduated high school in Napoleon. Midge attended community... View Obituary & Service Information

The family of Mildred Joy Forsberg created this Life Tributes page to make it easy to share your memories.

Mildred Joy (Coppernoll) Forsberg passed away surrounded by her...

Send flowers to the Forsberg family.