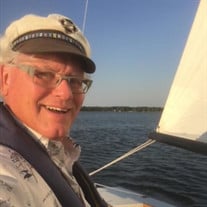 Pat Goggin, Cadillac resident, avid sailor, and local fashion icon, passed away peacefully at home on Friday April 29 th at the age of 70. He is already dearly missed by those he left behind: His wife Sally, daughters Sarah (Schepers) and Trish Goggin, son-in-law Andrew Schepers, grandson Ayden Roberts, sister Mary Lou (Oliver), brother-in-law Donald Oliver and their family. Shortly after his birth in July of 1951, Pat was adopted by William and Flora Goggin of Midland, MI. He quickly assessed that the position of “Favorite Child” would forever belong to Mary Lou, his older, prettier, and far more clever sister. Instead, he settled for the designation of “The Chosen One,” and proceeded to laud it over his beloved sister for the next 70 years. As an Art & Design student at Alma College, Pat spent his time causing mischief with his Delta Gamma Tau Fraternity brothers and ingratiated himself with his favorite breed of human: Women. In addition to his love for the fairer sex, Pat harbored a similar affection for the open water. After college, he imagined joining the crew of some private yacht and sailing around the world. But the world would have to wait when, on April 5th, 1972, Pat shared a first date with, Sally Bahlman—a vivacious (i.e. blonde) Theatre major from Battle Creek, MI. And, oh, what a pair they made. She loved how he made her laugh, and he loved how she lit up a room. Precisely three years later they were wed, consecrating what would become a 50-year love story populated by two loving daughters and their partners, a devastatingly handsome grandson, 11 moderately seaworthy boats, and an innumerable list of friends held as dear as family. Over the next 20 years, Pat contentedly settled in his hometown, started a family, and established a career in Public Affairs with the Dow Chemical Company. But in 1995, he came to Sally with an impetuous idea: Exchange the corporate world for a chance to recreate his happiest childhood memories in the old family cottage in Northern Michigan. It was always the plan to make the move once the girls were grown, why wait for retirement to live the good life? And the location of this golden paradise? Cadillac, Michigan. Specifically, Lake Mitchell. In Big Cove. On Sunset Point. Pat and Sally became partners in both life and business with the purchase of a home furnishings store in downtown Cadillac, ultimately named Possibilities for Your Home. From there, they both dove head-first into putting down roots and getting to know their new hometown. And the rest, as they say, is history. As a member of the community, Pat thrived on taking on as many projects as possible. He loved nothing more than to get to know new friends, and he formed a sincere, unique connection with everyone who crossed his path. In 2011, Pat became the Executive Director of United Way of Wexford and Missaukee Counties, appropriately translating his love for his adopted hometown into a career. As a father (both literally and figuratively), Pat was dubbed “Mayor of Sunset Point” (self-appointed, no term limit) and was known by the neighborhood as an inexhaustible purveyor of boat rides, water ski lessons, double dares, and ghost stories. At a party, Pat was…everywhere. He could often be located by following the loudest sounds of laughter. Perhaps he was fetching another round of “libations,” or burning it up on the dance floor. Or maybe he wandered away after spotting someone sitting alone, and now they’re holed up in a booth trading earnest life stories. Pat will be remembered for giving without limit--his talents, his time, his praise, his enthusiasm—and the ineffable beauty of his heart. His legacy of living a life full of joy, purpose, and laughter will live on in all who knew him. His spirit has returned to the lake, and he is home. Visitation will be on Thursday, May 5th, from 4:00 PM-7:00 PM at Peterson Funeral & Cremation Services in Cadillac, MI. A Memorial Mass will be held 11:00 AM Friday, May 6th, 2022 at Saint Ann Catholic Church in Cadillac. In lieu of flowers, donations may be made to United Way of Wexford-Missaukee Counties, or to the community theater, Cadillac Footliters. Cremation will take place and his ashes will be kept around as long as they match the décor. Admittance to the visitation and/or funeral will be denied to anyone wearing black. An online guestbook is available at www.petersonfh.com.

Pat Goggin, Cadillac resident, avid sailor, and local fashion icon, passed away peacefully at home on Friday April 29 th at the age of 70. He is already dearly missed by those he left behind: His wife Sally, daughters Sarah (Schepers) and Trish... View Obituary & Service Information

The family of Patrick Charles Goggin created this Life Tributes page to make it easy to share your memories.

Send flowers to the Goggin family.