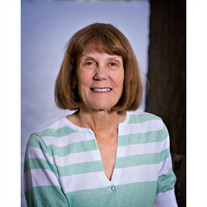 Paula Jean Greene of Cadillac passed away Saturday morning, August 17, 2013 at her home. She was 68. She was born on July 21, 1945 in Camden, Arkansas to Leon and Leona (Reimann) Nugent. Paula graduated from Cadillac High School in 1963 and went on to graduate from Michigan State University in 1966 with her Bachelor's degree. She would then go on to Wayne State University and graduate from there with her Master's in Education in 1982 and in 1988 her Education Doctorate in Early Childhood Education. Paula's first employment was teaching in Big Rapids from there she went to Mount Pleasant and later to Troy where she taught at Meadowbrook Nursery School. Later she worked for the Troy Public Schools and then on to be Principal of Pierce Elementary in Birmingham and during that time the school was awarded many state and national awards. Paula also taught college courses at Wayne State University and Saginaw Valley State University. She enjoyed spending time with her grandchildren as well as hiking, golfing, reading, skiing, boating and traveling. Paula was a member of St. Ann Catholic Church in Cadillac and many years ago she played the organ there and was a member of the choir. She was a volunteer for Wexford County Habitat for Humanity, was past President of Cadillac Welcome Club, member of the Cadillac Garden Club, member of the Cadillac Country Club and sang in the Cadillac Philharmonic Choir. On October 7, 1995 in Troy, Michigan she married Robert F. Greene and he survives her along with her children: Paul (Jennifer) Nystrom of Bloomfield Hills, Michigan and Alisa Martin of Novi; grandchildren: McKenna Martin and Ethan, Drew and Davis Nystrom; two sisters: Margaret (Leonard) Kalcher of Manistee and Sharon (Claude) Lemmer of Shepard; many nieces and nephews. She was preceded in death by her parents, Leon Nugent and Leona Nugent Breen. The Memorial Mass of Christian Burial will be held 11:00 AM Friday, August 23, 2013 at St. Ann Catholic Church in Cadillac with Msgr. Francis Murphy as celebrant. Burial will be at Mount Carmel Cemetery in Cadillac. Friends may meet the family from 4-7 PM Thursday at the Peterson Funeral Home in Cadillac. Memorial contributions may be made to the Missaukee County Humane Society, or www.cholangiocarcinoma.org, a non-profit foundation funding research for the early detection and treatment of bile duct cancer. An online guestbook is available at www.petersonfh.com.

Paula Jean Greene of Cadillac passed away Saturday morning, August 17, 2013 at her home. She was 68. She was born on July 21, 1945 in Camden, Arkansas to Leon and Leona (Reimann) Nugent. Paula graduated from Cadillac High School in 1963 and... View Obituary & Service Information

The family of Paula Jean Greene created this Life Tributes page to make it easy to share your memories.

Send flowers to the Greene family.