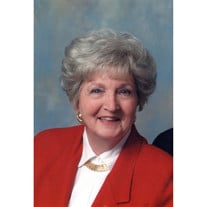 Paulina (Polly) Frances Johnson, nee Dassance, passed away peacefully on February 3, 2013 at the age of 87. Born September 5, 1925, she was one of twelve children of Elmer and Mable Dassance who resided near Cadillac, Michigan. She was a 1943 graduate of Mesick High School. Coming from a very musical family, Polly began playing saxophone at the age of fifteen in an all-girl five-piece band that performed for high school dances. She also played for dances at Yuma as well as her father's own dance hall built on their home property. She continued to play at church and family events throughout her life; her last performance was at her grandson's wedding reception at age 84. Upon graduation, Polly moved to Lansing where she was employed as a secretary in a factory converted to make blades for B27's and B57's for World War II aircraft. She later went to New Mexico where her sister and brother-in-law were stationed for a year. She returned to Cadillac and, at the end of the war, married World War II Staff Sergeant Veteran Lawrence E. Johnson of Tustin, Michigan. Polly was employed at Riverside Electric in Marion for a number of years, and at Johnson Clothing store in Cadillac for 14 more years where she truly enjoyed lasting friendships with co-workers and local residents. She also completed a course in Real Estate through The University of Michigan and was a successful licensed sales agent. Among her pastime passions were travels to Europe, Mexico and parts of the U.S. She was an excellent baker, specializing in Swedish rye bread, pies and cookies. As a devoted mother, she instilled positive values and gave up years of Saturday afternoons and evenings to take her children to piano lessons and sports activities. She is survived by her son, Joseph Johnson of Cadillac; daughter, Elaine Johnson of Tustin; grandchildren: Matthew Taylor (Jennifer) of Solvang, California, Kristen Myers (Matt Sr.) of Traverse City, MI, Adam Hahn of Okemos, MI and Courtney Hahn of Memphis, TN. She is preceded in death by her husband, Lawrence Johnson, daughter Cheryl Taylor (David), and siblings Florence Lane (Clare), Lillian Harrison (Dave), Donald Dassance (Nina), Thelma Boughton (Clare), Maurice Dassance, Dorris Davis (Dallas), Lloyd Dassance (Lucia), Mildred Forsberg (Robert), Lina Culver (Gerald), Laurence Dassance (Mary), Levi Dassance (Luella), and numerous nieces and nephews. Paulina (Polly) is now in her heavenly home and will be sorely missed by all whose lives she has touched and left behind. Cremation has taken place and no services are planned at this time. Memorial contributions may be made to The Jimmy V Foundation for Cancer Research. An online guestbook is available at www.petersonfh.com.

Paulina (Polly) Frances Johnson, nee Dassance, passed away peacefully on February 3, 2013 at the age of 87. Born September 5, 1925, she was one of twelve children of Elmer and Mable Dassance who resided near Cadillac, Michigan. She was a 1943... View Obituary & Service Information

The family of Paulina (Polly) Frances Johnson created this Life Tributes page to make it easy to share your memories.