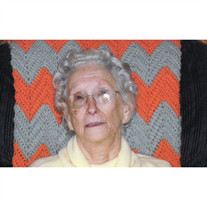 Pauline Vera Duncan of Cadillac died Friday, November 19, 2010 at her home. She was 87. She was born in Cadillac on August 23, 1923 to Alfie & Melinda (Dennis) Munson and they preceded her in death. She married Ralph E. Duncan on June 15, 1945 and he preceded her in death on November 3, 1983. At the age of 14 Pauline baby sat the children of Bryce Beemer, who was the Lone Ranger. Later she worked at the Columbiaville Woolen Mill for .42 cents an hour and for Riverside Electric for .72 cents an hour. She also had worked for Goss Canvas, waitressed at Lost Pine Lodge and Caberfae and retired from Delfield Company when they went out of business. After her retirement she enjoyed gardening, yard work, getting together with family and friends and playing shuffle board and earned several trophies doing so. Survivors include her sons: Lloyd (Joan) Duncan, Ralph (Diana) Duncan, and Albert (Deb) Duncan all of Boon, Jack (Rhonda) Duncan, Ronald (Jill) Duncan, and Steven (Carol) Duncan all of Cadillac; 18 grandchildren; 23 great grandchildren; 1 great-great grandchild; and a sister-in-law, Betty Munson of Cadillac. In addition to her parents and husband she was preceded in death by a son, Howard, daughter-in-law Ellen, granddaughters: Paula, Pam, Peggy Sue and Penny Candy; brothers: Red, J.D. and Herschel; sisters: Evelyn, Sylvia, Opal, Lilla and Alice. Funeral services will be held 11:00 AM Tuesday, November 23, 2010 at the Peterson Funeral Home in Cadillac with Pastor Will Markham officiating. Burial will be at the Boon Westside Cemetery. Friends may meet the family on Monday from 2-4 & 6-8 PM at the funeral home. Memorial contributions may be made to Hospice of Michigan

The family of Pauline Vera Duncan created this Life Tributes page to make it easy to share your memories.

Send flowers to the Duncan family.