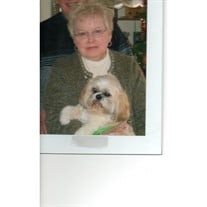 Pauline Raymond, of Marion, died at her home on Friday, March 16, 2012, surrounded by her loved ones. She was 83. She was born on October 9, 1928, in Cadillac, to Frank and Bertha (Fauble) Huggins. She graduated from Marion Public High School and married Carl Raymond on August 23, 1947, at the Marion United Methodist Church. She was very active, serving as a den mother for the Boy Scouts and a volunteer at Lakeview Lutheran Manor for five years. She enjoyed snowmobiling and rode a motorcycle with her husband until the age of 75. She was also a great cook and great at decorating. To her, the most important thing was family. She loved spending time with them and enjoyed going on picnics and having get-togethers. She really enjoyed her dogs â€" her most recent one being Aireale. She is survived by her husband, Carl Raymond of Marion; children, Paula (Raymond) Scott, Dean (Oleda) Raymond, Mary (Ron) Gibbs, and Craig L Raymond of Marion; grandchildren, Arend (Roxanne) Scott of Eaton Rapids, Aric (Robin) Scott of Marion, Deanna (Greg) Salisbury of Marion, Karla (Andrew) Blackmer of Kingsley, Ryan (Jennifer) Raymond of Marion, Theresa (Chuck) Decator of McBain, and Tennille (Michael) Heuker of McBain; 18 great-grandchildren; siblings, Mildred McCrimmon of East Lansing; Paul (Darlene) Huggins of Lansing; in-laws, Arlene (Richard) Swiler of Marion, Clifford Raymond of Lansing; Bruce (Sharon) Raymond of Tustin, and Dale (Linda) Raymond of Marion, and many other relatives. She was preceded in death by her parents; father-in-law and mother-in-law; Clifford and Louella Raymond; stepfather-in-law, Daniel Raymond; great-granddaughter, Emma Blackmer; infant brother, Raymond Buster Huggins; and in-laws, Robert McCrimmon, Hazel Raymond, Jane Gray and Rella Raymond. Memorial services will be announced at a later date. Memorial contributions may be made to the Marion United Methodist Church or Mercy Hospice. Funeral arrangements werre handled by the Burkholder Funeral Home in McBain. An online guestbook is available at www.petersonfh.com

Pauline Raymond, of Marion, died at her home on Friday, March 16, 2012, surrounded by her loved ones. She was 83. She was born on October 9, 1928, in Cadillac, to Frank and Bertha (Fauble) Huggins. She graduated from Marion Public High School... View Obituary & Service Information

The family of Pauline Raymond created this Life Tributes page to make it easy to share your memories.

Pauline Raymond, of Marion, died at her home on Friday, March...

Send flowers to the Raymond family.