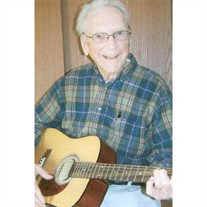 MODDERSVILLE, Mich. - Peter Clarence Heliste, age 93, of Moddersville, Mich. died February 16, 2011 at home. He was born on November 30, 1917 in Swedetown, a village near Calumet, Mich., to Charles and Elizabeth Heliste. He went to school in Swedetown until the sixth grade and then to Calumet High School, from which he graduated in 1937. He belonged to the Swedetown hockey team. After graduation, he joined the CCC and then was inducted into the U.S. Army in 1941. He served in World War II in Australia, the Phlippines and New Guinea in the Signal Corps as a technical sergeant. He was discharged on July 27, 1945. He then went to work for Michigan Bell in the Detroit area in December of 1945. He retired after 35 years of service in 1981 as a supervising foreman. He met Florence (Becky) Etapa in 1946, and they were married in 1947 in Hancock, Mich. at the Evangelical Lutheran Church. They were married for 63 years and had two daughters, Carin and Sandra. They did a lot of traveling in the states as well as overseas. He belonged to two travel clubs. After retirement, they moved from Beverly Hills, Mich. to Moddersville to be near their daughter, Sandra. He was a member of St. Johns Lutheran Church in Lake City and then joined Moddersville Reformed Church, where he was active in social activities. He also belonged to the Telephone Pioneers of Cadillac, was president of the Missaukee County Seniors, was a past president of the Lake City Seniors, was a trustee on the Holland Township Board and was a member of the American Legion. He loved music, reading, the computer, gardening and woodworking. Surviving are his wife, Becky; daughters, Sandy (Steve) Gruenberg of Moddersville and Carin (Steve) Pitzer of Franklin, Mich.; one granddaughter, Jennifer (Mike) Crawford of Helena, Ala.; one sister, Audrey Brevik of Burlington, Vt.; one brother, Regem Heliste of Las Vegas; and lots of nieces, nephews and cousins. He was preceded in death by his mother and father, seven brothers and one sister. A memorial service will be held at a later date at the Moddersville Reformed Church. Memorials may be made to the Moddersville Reformed Church. No flowers please. A special thanks to Dr. Alan Conrad and the staff at Mercy Hospital and Hospice. Arrangements were made by the Burkholder Funeral Home. An online guestbook is available at www.petersonfh.com.

MODDERSVILLE, Mich. - Peter Clarence Heliste, age 93, of Moddersville, Mich. died February 16, 2011 at home. He was born on November 30, 1917 in Swedetown, a village near Calumet, Mich., to Charles and Elizabeth Heliste. He went to school... View Obituary & Service Information

The family of Peter Clarence Heliste created this Life Tributes page to make it easy to share your memories.

Send flowers to the Heliste family.