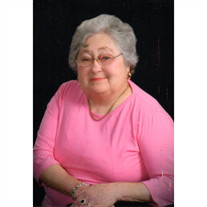 Priscilla Victoria Gabrielson Goble of Tustin passed away Saturday afternoon, May 31, 2014 at Munson Medical Center in Traverse City. She was 76. She was born on May 10, 1938 in Tustin to Columbus & Sarah (Groff) Langworthy and they preceded her in death. Priscilla graduated from Leroy High School. On June 28, 1963 in Tustin she married Lloyd E. Gabrielson and he preceded her in death on August 10, 1993. She later married Bobby D. Goble, Sr. on October 13, 2008 and he preceded her in death on February 26, 2011. She had been employed Wolverine Glove company and later at Evart Products. Prior to retiring she also worked in sales. Priscilla was a member of the Dighton Wesleyan Church as well as an auxiliary member of the Disabled American Veterans. Priscilla has a strong faith and was always giving to others. Her home was always open and she loved to cook a meal for those who visited. She was fond of the color yellow, enjoyed talking on the phone, mushroom hunting and flowers. Priscilla loved her children and grandchildren. Survivors include her children: David (Linda) Gabrielson of Chase, Victoria Rockafellow of Evart and Betty Mitchell of Cadillac; 8 grandchildren: Jacklyn Gabrielson, Frederick Rockafellow, Brandon VanderVelde, Victor Rockafellow, Jr., Katie VanderVelde, Ann Rockafellow, Taylor Mitchell and Travis Mitchell; 4 brothers: William Langworthy of Tustin, Jerimiah (Joyce) Langworthy of Whitehall, John (Gloria) Langworthy of Tustin, and Abraham Langworthy of Ravenna; 2 sisters: Elizabeth (Bob) Patulski of Freesoil and Ruth (Harold) Nelson of Reed City and many nieces and nephews. In addition to her parents and husbands she was preceded in death by a son-in-law, Victor Rockafellow. Funeral services will be held 11:00 AM Thursday, June 5, 2014 at the Peterson Funeral Home in Cadillac with Reverend Orson Deemer officiating. Burial will be at Maple Hill Cemetery in Cadillac. Friends may meet the family Wednesday from 4-7 p.m. at the funeral home. An online guestbook is available at www.petersonfh.com.

Priscilla Victoria Gabrielson Goble of Tustin passed away Saturday afternoon, May 31, 2014 at Munson Medical Center in Traverse City. She was 76. She was born on May 10, 1938 in Tustin to Columbus & Sarah (Groff) Langworthy and they preceded... View Obituary & Service Information

The family of Priscilla Victoria Gabrielson Goble created this Life Tributes page to make it easy to share your memories.