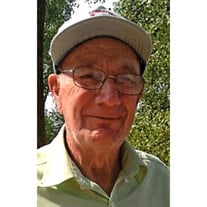 Raymond Kimbel, Jr. of Manton passed away Sunday, April 6, 2014 in his home surrounded by his family. He was 81. He was born on April 20, 1932 in Grand Rapids, Michigan to Raymond and Henrietta (Zylstra) Kimbel and they preceded him in death. On October 23, 1954 he married Patricia Fay Frying. Ray graduated from Manton High School in 1951 and went on to serve in the United State Marine Corp. He was an active member of the Seventh Day Adventist Church of Manton. He had the position of the longest running mayor of Manton for 21 years, during which time he was awarded Citizen of the Year. He retired in 1992, after driving bus for 27 years for Manton Consolidated Schools. He owned and operated a masonry business, Kimbel Construction for many years with his sons. Ray was a member of the Rotary Club of Manton as well as a volunteer firefighter. Ray loved spending time and being surrounded by his children, grandchildren and great grandchildren. He also loved volunteering for his church, community, doing woodwork, traveling and being outside. Ray is survived by his wife, Patricia of Manton; children: Sheryl (Kim) Neeb of Portage, Alan Kimbel of Manton, Shana LaPan of Temperance and Melissa (Randy) Miles of Manton; daughter in law, Lisa Kimbel; grandchildren: Ryan LaPan, Tia (Neeb) VanDyke, Tiffany Neeb, Chelsea Kimbel, Adriane Kimbel, Joseph Kimbel, Jillian LaPan, Jessica (LaPan) Owens, Coleman Kimbel and Noah Miles; great grandchildren: Alaina LaPan, Chloe Owens, Kaiden Owens, Cameron LaPan, Charlie LaPan, Emerson LaPan and Jonathon Sult- Neeb; sisters, Betty (Bob) Miller of Comstock Park and Emmaline (Bill) Marsh of Cadillac and sister in law Arlene Kimbel. In addition to his parents Ray was preceded in death by his son, Randy J. Kimbel; brothers, Donald Kimbel and Jack Kimbel; infant brother, Gerald Eugene and sisters, Henrietta (Dave) Hiebert and Berdenia (Ivan) Groth. Funeral services will be held 1:00 p.m. Thursday, April 10, 2014 at the Seventh-day Adventist Church in Cadillac with Pastor Jonathan Chitwood officiating. Friends may meet the family one hour prior to the service at the church. Burial will take place at Fairview Cemetery in Manton. An online guestbook is available at www.petersonfh.com.

Raymond Kimbel, Jr. of Manton passed away Sunday, April 6, 2014 in his home surrounded by his family. He was 81. He was born on April 20, 1932 in Grand Rapids, Michigan to Raymond and Henrietta (Zylstra) Kimbel and they preceded him in death.... View Obituary & Service Information

The family of Raymond Kimbel, Jr. created this Life Tributes page to make it easy to share your memories.

Send flowers to the Jr. family.