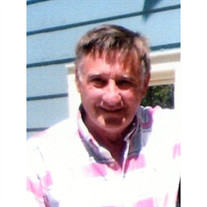 Raymond Rossell Jr. was born into Eternal Life Monday, May 19, 2014. He made this journey surrounded by his loving family. Ray's earthly life began September 4, 1936 as the first-born son of Raymond Sr. and Ernestine M. (Lindeman) Rossell in Manistee, Michigan. His parents left this world before him, along with a sister, Donna Mitchell; a brother, Wilmarth "BillyÃ¢â‚¬Â Rossell; a granddaughter, Emily Piskor; brother-in-laws, a sister-in-law and nephews. Ray's life as a young boy took place on his dad's dairy farm in Boon, Michigan. The Rossell family raised their own food and milked several cows. As the oldest son, Ray worked hard to help provide and care for his family of 13. Over those years, he was taught strong work ethics which remained with him his entire life. Those work ethics were passed on to his children which made them strong and successful in life. On Valentine's Day in the year 1956, Ray married his darling sweetheart, former Charlotte K. Bozung, in Ionia, Michigan. She was the love of his life as shown by his faithful commitment to her over 58 years. His undying love was sealed in his final hour of life when he gave her his last breath in the form of two kisses. Ray's wife Charlotte remains here, along with their eight children: Debra (Bruce) Vennema of Tustin; Laurie (Kevin) Decker; Terri Sue (Tony) Williams; Tracy (Tom) Oliver; Kristie Harrington (Chris Piskor); Linda (Eric) Vranish; Tim (Tanya) Rossell; Nicole (Bradley) Little, all of Cadillac; 25 grandchildren; 15 great grandchildren; brothers and sisters Patricia Otberg, Nancy Root, Robert (Audrey) Rossell, all of Cadillac; Mary (Gary) Clough; Sally (Bill) Junites, all of Boon; Terry Rossell, Betty Roth, Diana (Dick) Heydenberk; Karla (Chuck) Wright and David (Cindy) Rossell, all of Cadillac; and many nieces and nephews. Ray served in the National Guard for four years. He was employed by Kysor (Borg Warner) as a CNC Machinist for over 30 years before retiring in 1999. Ray was a man of many talents. He could fix almost anything. He was a great problem-solver and never turned down a challenge. A "youngÃ¢â‚¬Â 77, Ray could relate to the younger generation and was a wonderful role model. He loved sharing his knowledge and passion of cars with family and friends. Ray was a people-person who enjoyed long conversations with many cups of coffee. Ray was loved by many, especially his family. He was his wife's best friend, a wonderful husband, father, grandfather and brother. His kind, gentle nature will always be remembered. His unforgettable smile will be missed by us all. A "Celebration of LifeÃ¢â‚¬Â visitation will be held for family and friends at the Revival Center in Cadillac on Plett Road Friday, May 23, 2014, from 4-7 p.m. In lieu of flowers, memorial contributions may be made to the Lymphoma Foundation. An online guestbook is available at www.petersonfh.com.

Raymond Rossell Jr. was born into Eternal Life Monday, May 19, 2014. He made this journey surrounded by his loving family. Ray's earthly life began September 4, 1936 as the first-born son of Raymond Sr. and Ernestine M. (Lindeman) Rossell in... View Obituary & Service Information

The family of Raymond Rossell Jr. created this Life Tributes page to make it easy to share your memories.

Raymond Rossell Jr. was born into Eternal Life Monday, May 19,...

Send flowers to the Jr. family.