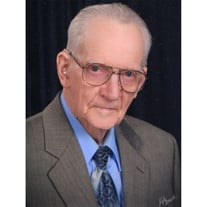 Raymond VanderVlught of Cadillac went to be with his Lord Monday evening, February 14, 2011 at his home. He was 95. He was born in Lucas on June 3, 1915 to Ralph & Henrika Henrietta (VanWieren) VanderVlught. He married the former Marvis Eleanor Swartwood on March 27, 1937 in Lucas and she preceded him in death on October 30, 2000. He later married the former Juanita (Seelye) Moore in Cadillac on April 17, 2004. He was employed at B.F. Goodrich for 18 years and later at the Cadillac State Bank for 20 years as head of maintenance for their several locations and retired in 1980. He loved wood working, carpentry and was a devoted husband, father, and grandfather. Ray was a member of the First Baptist Church in Cadillac and since his marriage to Juanita he also attended the Northern Lights Church of Cadillac. Survivors include his wife, Juanita of Cadillac; daughter, Esther (Dallas) Ashbay of Cadillac; grandchildren: Steven (Mimi) Johnson of Virginia Beach, VA, Michael Johnson of Grand Rapids, Mark Ashbay of Grand Rapids, Paul (Ann) Ashbay of Cadillac, Susan (Aaron) Whipple of Racine, WI, and Sarah (James) Burkhart of Mount Pleasant; 11 great grandchildren; step children: Larry (Ann) Moore, Greg (Wendy) Moore all of Cadillac and Sharon (Thomas) Reamer of Lake City; step grandchildren: Larry (Carol) Moore, II of Tennessee, John (Kelly) Moore of Lake City, Lisa (Russell) Fox of Manton, Aimie (Chad) Rayborn of Grand Rapids and Heidi (Brent) Shubring of Brighton; 10 step great grandchildren. In addition to his first wife Marvis he was preceded in death his sisters: Gladys Marvin and Gertrude Swartwood; a brother, Herbert VanderVlucht and a daughter, Emilie Hill. Funeral services will be held 11:00 AM Saturday, February 19, 2011 at the First Baptist Church in Cadillac with Reverend David McMahon and Reverend John Mellish officiating. Burial will be at Richland Township Cemetery in Missaukee County. Friends may meet the family from 4-7 PM Friday at the Peterson Funeral Home in Cadillac. Memorial contributions may be made to First Baptist Church Building Fund or to Northern Lights Church of Cadillac Renovation Fund. An online guestbook is available at www.petersonfh.com.

Raymond VanderVlught of Cadillac went to be with his Lord Monday evening, February 14, 2011 at his home. He was 95. He was born in Lucas on June 3, 1915 to Ralph & Henrika Henrietta (VanWieren) VanderVlught. He married the former Marvis Eleanor... View Obituary & Service Information

The family of Raymond VanderVlught created this Life Tributes page to make it easy to share your memories.

Raymond VanderVlught of Cadillac went to be with his Lord Monday...

Send flowers to the VanderVlught family.