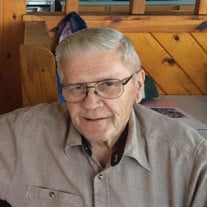 Richard Lee “Dick” Black, Sr. passed away February 8, 2022 at Munson Healthcare Cadillac Hospital. He was 89. Dick was born December 2, 1932 in Cadillac to Nelson W. and Elizabeth “Betty” (Peterson) Black and they preceded him in death. On May 20, 1957 he married Bertie M. Voorhees and she preceded him in death on March 11, 2014. He graduated from Tustin High School in 1951 and served honorably in the United States Army. Dick worked at Brooks and Perkins and Mid State Fruit in Cadillac. In his younger years Dick enjoyed playing baseball on teams all over the area. He still enjoyed watching baseball and never missed a Detroit Tigers game. Dick was an avid golfer and enjoyed taking golf cart rides at home. Dick and his wife, Bertie, took many trips together; he enjoyed taking the grandchildren for trips in their motorhome. Dick could be found spending hours on his John Deere mowing the grass and working outside. He would frequently be found at Big Boy enjoying his coffee and breakfast. He is survived by son, Frank A. Black, Sr. of Cadillac; daughter-in-law, Melissa M. Black of Tustin; six grandchildren: Frank (Teresa) Black, Jr., Trevor (Linda) Black, Jason (Emilie) Black, Justin (Danielle) Black, Jenny (Ken) Akini, and Heidi Black; 13 great grandchildren; a brother, Art (Sharon) Black of Tustin and several nieces and nephews. In addition to his parents and wife, Dick was preceded in death by a daughter, Lynda in 1967 and a son, Richard “Rick” Black, Jr. in 2012. Funeral services will be held 4:30 PM Friday, February 11, 2022 at Peterson Funeral and Cremation Services in Cadillac with Pastor Dan Klotz officiating. Friends may meet the family one hour prior to the service at the funeral home. Burial will take place at Maple Hill Cemetery in Cadillac. An online guestbook is available at www.petersonfh.com.

The family of Richard Lee Black Sr. created this Life Tributes page to make it easy to share your memories.

Send flowers to the Black family.