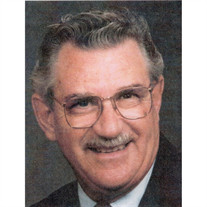 Richard T. Parrette passed away on April 26, 2012 at Autumnwood of McBain. He was 91 years old. He was born November 2, 1920 in Grand Rapids, Michigan. He and his wife, Rita Jo, who predeceased him on September 17, 2011, were married for 72 years. For over 60 years he was a salesman in outdoor advertising. He was also known for hand- painting signs, banners and lettering vehicles. In his spare time he loved to play cards, pool and he loved to hunt. For many years at least two generations of his family would get together to hunt annually in the Cadillac area. His greatest love, however, was golf. He began at nine years old as a caddy at the Camp Lake Golf Course near Sparta, Michigan. He started to actually play Golf when he was 14 and was a member of McGuires for many years. In 2005 he won First Place in the Tuesday Night Men\'s league at McGuires, and he played until he was in his late eighties. He had been a member of the First Congregational United Church of Christ and had served on the Board of Trustees. He is survived by his daughters in Cadillac: Sharon (Richard) Ulrey, Cynthia (Richard) Poulos, Candice (Brian) Gudowski, Jane (Richard) Lefere of Jackson, one son, Richard T. (Valerie) Parrette, Jr. of LaPorte, IN, and one daughter-in-law, Paula Parrette of Sugar Grove, Il, 12 grandchildren: Rick (Colleen) Ulrey, Kimberley (Cliff) Wilkerson, Jamie (Dean) Walker, Tamara Ulrey, Amy (Frank) Cardello, Chad (Jen) Parrette, Christopher (Mary) Poulos, Jodie (Jeff) Bach, Michael (Jessica) Parrette, Danielle Renwick, Jenny Parrette, and Nikolas (Amber Simms) Gudowski; 15 great grandchildren: Ivy & Zoey Ulrey, Tara(Chris) Donzell, Robert Fisk, Jacob & Gregory Torrey, Alyssa & Lexie Cardello, Matthew and Marie Parrette, Kayla & Evan Bach, Kallie Poulos, Keegan & Kaleb Gudowski; and 2 great- great grandchildren: Michael & Harmony Donzell and many nieces and nephews. He will sadly missed by everyone. He was also predeceased by his parents Jane and Maurice Ramam of Sparta. MI, one brother, James Parrette of Grand Rapids, MI, two sons: Kim Parrette of Cadillac and Michael Parrette of Sugar Grove, IL and a grandson-in-law, Benn Renwick. Memorial services will be held at Peterson Funeral Home at 11:00 am Saturday, May 19, 2012 with Pastor Bill Hirschfeld officiating. Memorial contributions may be made to the American Heart Association of Michigan or your local animal shelter. An online guestbook is available at www.petersonfh.com

The family of Richard T. Parrette created this Life Tributes page to make it easy to share your memories.

Send flowers to the Parrette family.