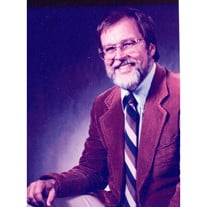 Robert E. Diehl, Jr. of Cadillac passed away Wednesday, October 17, 2012 at Munson Medical Center in Traverse City. He was 77. Robert was born June 14, 1935 in Mark Center, Ohio. His parents were Robert and Marian (Allen) Diehl. A 1953 graduate of Mark Center High School, he served three years, 1955- 1958, with the United States Army 3rd Cavalry Regiment, which patrolled the East German and Czechoslovakian borders during the Cold War. He married the former Rita Catherine Clemens on August 30, 1958 in Defiance, Ohio where he attended Defiance College and edited and renamed the school newspaper, The Defender. He was also co-creator and editor of the school literacy magazine, Progeny. He began a newspaper career while in college what would extend some 40 years through publications in: Ohio, Michigan, California, Florida and Montana as a: writer, columnist, editor and publisher. He also served as an editorial consultant for Thomson Newspapers and posted in their Chicago and Kansas City offices, dealing with more than forty newspapers nationwide. Robert won several writing awards for his columns and features. He was first wire editor, then sports editor for the Defiance Crescent news during the 1960\'s. He was first editor of the Cadillac Evening News during the 1970\'s when the paper and its staff won several journalism awards. Robert was the editor of the Escanaba Daily News during the late 70\'s and early 80\'s and it won first place general excellence and individual awards under his direction. He is survived by his wife, Rita; three daughters, Debra (Scott) Maresh, Dawn Diehl all of Cadillac and Andrea (Garett) Bass of Lake Isabella, Michigan; four grandchildren: Sydney Maresh of Cadillac, Gage, Gabrielle and Grace all of Lake Isabella; two sisters, Sharon (Steve) Sierer of Oakwood, Ohio and Mary Ann Eck of Auburn, Indiana; a brother, Jim (Nancy) Diehl of Jacksonville, Florida and many nieces and nephews. In accordance with his wishes cremation has taken place and no services will be held. Arrangements were made by the Peterson Funeral Home in Cadillac. An online guestbook is available at www.petersonfh.com.

The family of Robert E. Diehl, Jr. created this Life Tributes page to make it easy to share your memories.