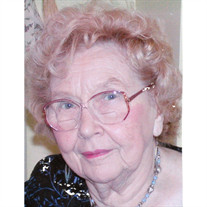 Ruth O. Peterson of Cadillac passed away peacefully at her home Tuesday evening, May 15, 2012. She was 89. She was born in Burdell Township, Osceola County on December 24, 1922 to David & Agnes (Watson) Johnson, the sixth of seven children. She grew up in the Tustin area, and was salutatorian and president of the 1940 class of Tustin High School. On May 30, 1942 she married Arden M. Peterson of Leroy and they settled in Okemos, Michigan, where they raised their six children, returning to Tustin in 1978 upon their retirement. Arden preceded her in death in October of 1995. She was also preceded in death by her two older brothers and three older sisters. Survivors include her sons: Alvin (Karen) of Tustin, Arlo (Kevin) of Cadillac, Jonathan (Lynn) of Tustin, and David (Marci) of Key West, Florida; her daughters: Maija Peterson (Arjen Greydanus) of Okemos, and Martha (Ron) Modene of Reed City; seven grandchildren; five great grandchildren; her younger brother, Max (Mary) Johnson of Cadillac; many nieces and nephews. Though her greatest achievement was in being the best mother ever in the world to her six children, she taught school, worked in grocery stores, and in recent years enjoyed passing out products samples in local stores and supermarkets. She played and taught guitar, loved to sing and play her piano and instilled a great love of music in all her children. Her quick, dry wit coupled with her steady good nature, endeared her to everyone who knew her. Ruth was active in the Pine River Historical Society, Cadillac Area Scandinavian Society, and was a member of the United Methodist Church of Cadillac. Memorial services will held 3:00 PM Saturday, May 19, 2012 at the United Methodist Church in Cadillac with Reverend Thomas Ball and Parish Assistant Judy Coffey officiating. In lieu of flowers memorial contributions may be made the United Methodist Church of Cadillac. Arrangements were made by the Peterson Funeral Home in Cadillac. An online guestbook is available at www.petersonfh.com.

Ruth O. Peterson of Cadillac passed away peacefully at her home Tuesday evening, May 15, 2012. She was 89. She was born in Burdell Township, Osceola County on December 24, 1922 to David & Agnes (Watson) Johnson, the sixth of seven children.... View Obituary & Service Information

The family of Ruth O. Peterson created this Life Tributes page to make it easy to share your memories.

Ruth O. Peterson of Cadillac passed away peacefully at her home...

Send flowers to the Peterson family.