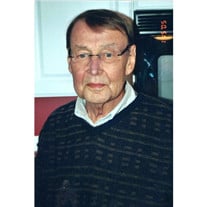 Stephen L. Kolarevic of Cadillac passed away Friday morning, November 18, 2011 at Mercy Hospital in Cadillac. He was 76. He was born June 24, 1935 in Detroit to Stephen and Helen (Larry) Kolarevic and they preceded him in death. Upon graduation from high school Dr. Kolarevic served in the United States Army for two years while stationed in Germany. Following the military he returned to the United States and attended Illinois School of Optometry in Chicago. After graduation from ISO he moved to Cadillac to practice optometry for 42 years. Dr. Kolarevic was an avid outdoorsman. He enjoyed bird hunting and big game hunting. Some of his favorite time was spent at his cottage on Manistee Lake. He also enjoyed coaching CASA for his sons and spending time with his grandchildren. Dr. Kolarevic was a member of St. Mary\'s Episcopal Church and had served as treasurer there for many years. He was also a member of the Elks Lodge, Cadillac Sportsman Club and Optimist Club of Cadillac. On August 3, 1962 he married the former Bonnie M. Davenport in Dearborn, Michigan and she survives him along with their two sons, John (Debbie) Kolarevic and Mike (Betsy) Kolarevic all of Traverse City; four grandchildren: Elena, Christopher, Ethan and Kobe; two sisters, Mary Martin of Dearborn and Cecila (James) Teteak of Phoenix, Arizona. Funeral services will be 11:00 AM Tuesday, November 22, 2011 at the Peterson Funeral Home in Cadillac with Reverend Fr. William Fleener officiating. Burial will be at Lake City Cemetery. Friends may meet the family from 5-7 PM Monday at the Funeral Home. Memorial contributions may be made to Leader Dog for the Blind or to St. Mary\'s Episcopal Church. An online guestbook is available at www.petersonfh.com.

Stephen L. Kolarevic of Cadillac passed away Friday morning, November 18, 2011 at Mercy Hospital in Cadillac. He was 76. He was born June 24, 1935 in Detroit to Stephen and Helen (Larry) Kolarevic and they preceded him in death. Upon graduation... View Obituary & Service Information

The family of Stephen L. Kolarevic created this Life Tributes page to make it easy to share your memories.

Send flowers to the Kolarevic family.