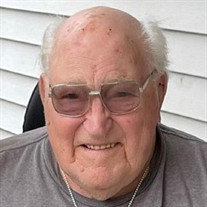 Thomas H. “Tom” Harris, age 93 of Cadillac passed away on January 6th, 2022, at Munson Medical Center following a brief illness. Tom was born at home December 11th, 1928, in Ferndale, Michigan to Thomas Edward and Mildred May (Fournier) Harris. As a young man he enjoyed sports, especially football, where he made multiple tackles and received Honorable Mentions at the Defensive Guard Position. He graduated from Lincoln High School (Ferndale) in 1947. It was when Tom attended Central Michigan University that he discovered the wonder of the natural sciences. He transferred to Michigan State College (University) and in 1951 earned his Bachelor of Science Degree in Botany with a Minor in Forestry. Before pursuing his career, he joined the U.S. Army, graduating Officer’s Training School in 1952. He served overseas during the Korean Conflict rising to the rank of Lieutenant. He was stationed in La Rochelle, France and as a Sanitary Engineer in the Medical Corps, overseeing 23 different Army installations. Tom returned home in 1954, where not long after he met the greatest love and inspiration in his life, Marguerite Wedin during a blind date. Three months later on October 1, 1954 they married. Soon after, they moved to Corvallis, Oregon where Tom enrolled in Oregon State University pursuing Master's in Forestry and Wood Technology. Following the birth of their first child (Christopher), the family moved to Cadillac in 1957 and in 1958 saw the birth of their daughter (Jennifer.) Tom worked for Wedin Corporation serving as President and General Manager until 1978 when Tom and, Marguerite opened a business of their own; Rempco Inc. They operated it successfully until it was sold in 2010 and the two permanently retired. Tom was also very active in the community serving on the Building Authority during the construction of the Wexford/Missaukee County Library, Cadillac City Hall, and Fire Station. He was on the boards of Lakeview Manor (Samaritas), Lutheran Social Services of Michigan, Cadillac Chamber of Commerce, Cadillac Industrial Fund, Cadillac Area Community Foundation, Cadillac Area Land Conservancy, Trinity and St. John's Lutheran Churches. He was also the Cadillac Representative to the Private Industrial Council of Northwest Michigan as well as a lifetime member of the Cadillac Rotary Club. He found Cadillac a prime location to indulge in his outdoor hobbies such as fishing, hunting, photography, forestry and travel. Tom is survived by his son, Christopher; daughter Jennifer; grandson, Brenton as well as nephews Jon and Eric (Kirst), Paul and David (Morey), not to mention numerous great-nieces, nephews and cousins. He was preceded in death by his wife of over 63 years, Marguerite, and his two sisters Marion (Kirst) and Marjorie (Morey). In lieu of flowers, memorial contributions can be made to The Cadillac Community Foundation, Cadillac Area Land Conservancy, Cadillac Rotary Charities or Trinity Lutheran Church of Manton. A memorial service will be planned for the spring. A memorial service will be planned for the spring. An online guestbook is available at www.petersonfh.com.

The family of Thomas H. "Tom" Harris created this Life Tributes page to make it easy to share your memories.

Send flowers to the Harris family.