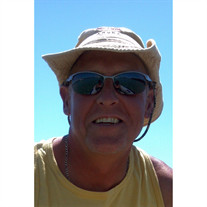 Thomas M. \"Tom\" Haines of Cadillac passed away Wednesday morning, January 16, 2013 at St. Mary\'s Health Care in Grand Rapids. He was 58. He was born July 29, 1954 in East Detroit, Michigan to Louis Milton and Marguerite (Nosko) Haines. Tom married the former Dianna Nicholas on June 13, 2009 at the First Presbyterian Church in Cadillac. Tom was a member of the First Presbyterian Church in Cadillac as well as the local 406 Teamsters. He loved fishing the Manistee River and boating in Grand Traverse Bay with many special friends. He also enjoyed snowmobiling, golfing, biking and playing softball. Tom was a Detroit Tigers and Lions fan. He loved spending time with his granddaughters, family and special dog, Ginger. He is survived by his beloved wife and soul mate, Dianna; children, Thomas (Jenny) Haines of Kingsley, Cody Haines of Cadillac, Brandi (Josh) Reynolds of Traverse City and Ryan Elenbaas of Mt. Pleasant; grandchildren, Jordan and Josie Reynolds and Baby Haines due in 2013; his mother, Marguerite \"Margie\" Haines of Cadillac; brother, Tim (Barb) Haines of Cadillac; sister, Tammy (Dan) Doornbos of Traverse City and nieces and nephews: Lindsey (Nick) Jacobson and Carrie Haines of Cadillac, Andy (Melissa) Doornbos, Jenna Doornbos and Christopher Doornbos all of Traverse City. He was preceded in death by his father, Louis Haines on February 14, 2002 and grandparents: Louie and Flossie Haines and Martin and Katherine Nosko. Funeral services will be held 11:00 a.m. Monday, January 21, 2013 at the First Presbyterian Church in Cadillac with Reverend Paul Tomlinson officiating. Friends may meet the family from 2-4 and 6-8 p.m. Sunday at the Peterson Funeral Home in Cadillac. Burial will be at Maple Hill Cemetery in Cadillac. In lieu of flowers memorial contributions may be made to the American Cancer Society, Hope Lodge in Grand Rapids or First Presbyterian Church Outreach and Fellowship Team. An online guestbook is available at www.petersonfh.com.

The family of Thomas M. "Tom" Haines created this Life Tributes page to make it easy to share your memories.