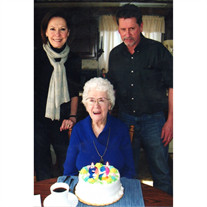 Virginia Edla Dahlquist Hoekwater Ralston, of Marion, died peacefully in the arms of her Lord surrounded by members of her family on March 3, 2012, at Autumnwood of McBain. She was 94 years old. Born on February 28, 1918, in Cadillac to Robert and Wava (Hood) Dahlquist, Virginia married Harold Hoekwater on December 30, 1941 in Reed City and he preceded her in death on March 4, 1970. On January 3, 1977, she married James Ralston in Marion and he preceded her in death on April 19, 1999. She was also preceded in death by her step-daughter, Joan (Tony) Monte. A well known business woman, Virginia began her retail career upon graduation from Reed City Hight School when she moved to Marion to manage a dime store her father had purchased. After her marriage to Harold Hoekwater, she lived for several years in Cadillac, but returned to Marion in 1956 where she and her husband managed the Ben Franklin Store for 20 years. After Harold\'s death, she continued to run the store for four more years. Active in the Marion community, Virginia served as a member of the Chamber of Commerce, was a trustee of the Marion Public Library and a member of the 20th Century Club. Always engaged in the life of her church, Virginia was a member of the Calvin Christian Reformed Church, where she found many opportunities to serve. She cherished church worship, enjoyed entertaining family and friends, was an avid reader and loved watching the birds in her backyard. Her caregiver, Jo Anne Davidson, and many dear friends, blessed her days. Survived by children and step-children Jan (Kent) Druyvesteyn of Ada, Marilyn (Bob) Strauch of Middleboro, Mass., Joe (Gayla) Hoekwater of Zeeland, James Ralston Jr. of Cumberland Md., Jean (Dick) Schmidt of Fennville, Jon (Beth) Ralston of Cadillac. Sixteen grandchildren and 16 great-grandchildren. Brother Robert (Elaine) Dahlquist of Reed City. And many beloved nieces and nephews. Funeral services will be held at 11 a.m. on Tuesday, March 6, at the Calvin Christian Reformed Church with Ken Koning officiating. Burial will in the Greenwood Cemetery, Marion. Visitation will be Monday, March 5, from 3 to 8 p.m. at the Burkholder Funeral Home in McBain. The casket will be open for viewing at the funeral home visitation, but will be closed at the church on Tuesday. Memorial contributions may be made to the Calvin Christian Reformed Church. Online guestbook is available at www.petersonfh.com.

Virginia Edla Dahlquist Hoekwater Ralston, of Marion, died peacefully in the arms of her Lord surrounded by members of her family on March 3, 2012, at Autumnwood of McBain. She was 94 years old. Born on February 28, 1918, in Cadillac to Robert... View Obituary & Service Information

The family of Virginia Edla Dahlquist Hoekwater Ralston created this Life Tributes page to make it easy to share your memories.