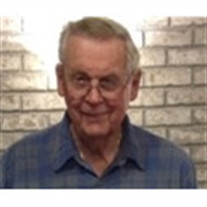 Wallace L. "MacÃ¢â‚¬Â McCulloch of Cadillac formerly of Anchorage, Alaska passed away Monday afternoon, April 7, 2014 at Green Acres Retirement Living in Cadillac. He was 86. He was born on July 27, 1927 in Milwaukee, Wisconsin to Henry W. & Irma (Steinert) McCulloch. On July 19, 1952 in Pine City, Minnesota he married the former Betty R. Buchta and she preceded him in death on March 3, 2013. Mr. McCulloch graduated from Spooner High School in Spooner, Wisconsin and had been employed at his father's gas station and later as a deputy sheriff in Spooner. While living in Spooner he was a member of the Spooner United Methodist Church and was active with the Spooner Railroad Museum. Later he took a job with the Chicago & Northwestern Railroad. In 1961 he moved to Anchorage, Alaska where he worked for the Alaska Railroad for over 30 years and retired as a conductor. He was a member of the Alaska Railroad Pioneers and Beautiful Savior Lutheran Church of Anchorage. "MacÃ¢â‚¬Â loved the railroad and enjoyed golf, traveling in his Winnebago motor home, snowmobiling, fishing, spending time with family, Wii bowling at Green Acres and was very passionate about music and could be found at the Upbeat Cadillac Jazz concerts and all the music programs at Green Acres. Survivors include his In-laws: Bob (Goldie) Buchta of Spooner, WI, Estie (Floyd) Murphy of Duluth, MN, Marie (Bob) Jenkins of Wellston, MI, John (Sandy) Buchta of Salem, OR, Glenn (Darla) Buchta of Anchorage, AK, and Nick Buchta of Eagle River, AK; many nieces and nephews and grandnieces and grandnephews. In addition to his parents and wife he was preceded in death by a sister, Shirley McCulloch in 2011. Memorial services will be held 1:30 PM Wednesday, April 16, 2014 at Green Acres Retirement Living in Cadillac with Reverend Thomas Ball officiating and full military rites under the auspices of the Cadillac Area Honor Guard. His final resting place will be in Spooner, Wisconsin where there will be another memorial service at a later date. In lieu of flowers memorial contributions may be made to Hospice of Michigan, Upbeat Cadillac Jazz, or to the Music programs at Green Acres Retirement Living. An online guestbook is available at www.petersonfh.com.

Wallace L. "MacÃ¢â‚¬Â McCulloch of Cadillac formerly of Anchorage, Alaska passed away Monday afternoon, April 7, 2014 at Green Acres Retirement Living in Cadillac. He was 86. He was born on July 27, 1927 in Milwaukee, Wisconsin to Henry W. &... View Obituary & Service Information

The family of Wallace L. "Mac" McCulloch created this Life Tributes page to make it easy to share your memories.