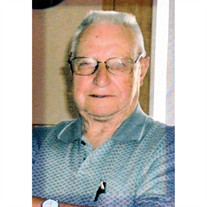 Willard L. Wright of Cadillac passed away Sunday morning, September 7, 2014 at Mercy Hospital in Cadillac. He was 96. He was born on July 15, 1918 in Copemish to Clifford L. & Elsie M. (Rust) Wright. Mr. Wright went to school in Copemish and later went to work in Owosso at a Tool & Die shop. He then moved to the Traverse City area and worked on cherry farms. In 1944 he entered the United States Navy, during World War II. After the war he returned to work on the cherry farm and later moved to the Cadillac area where he farmed for many years while also working at J.C. Penny for 29 years of employment. Willard was a member of the Moose Lodge, American Legion, the VFW, and was an active member of South Community United Methodist Church. He enjoyed hunting, fishing, gardening and loved farming, but most of all he loved his family. On December 31, 1938 in Angola, Indiana he married the former Velma Carmean and she survives him along with their children: Willard "BillÃ¢â‚¬Â (Patty) Wright of Cedar Springs, Garold \"Gary\" (Ellen) Wright of Cadillac, Dan (Sharon) Wright of Green Cove Springs, FL, Rick (Bev) Wright of Sterling Heights, and Randy (Val) Wright of Macomb; numerous grandchildren, great grandchildren and great great grandchildren; and a sister, Shirley Bryan of Tennessee. In addition to his parents he was preceded in death by a son, Darold L. Wright, Sr.; a sister, Vera Sparks and 4 grandsons: Gary Wright, Jr., Jerry Lee Wright, Darold L. Wright, Jr. and Dennis C. Wright. Funeral services will be held 11:00 a.m., Thursday, September 11, 2014 at the South Community United Methodist Church with Reverend Jim Mort officiating. Friends may meet the family Wednesday from 6-8 p.m. at the Peterson Funeral Home. Burial will be at Cleon Township Cemetery in Manistee County with full military rites under the auspices of the Cadillac Area Honor Guard. Memorial contributions may be made to the South Community United Methodist Church. An online guestbook is available at www.petersonfh.com.

Willard L. Wright of Cadillac passed away Sunday morning, September 7, 2014 at Mercy Hospital in Cadillac. He was 96. He was born on July 15, 1918 in Copemish to Clifford L. & Elsie M. (Rust) Wright. Mr. Wright went to school in Copemish and... View Obituary & Service Information

The family of Willard L. Wright created this Life Tributes page to make it easy to share your memories.

Send flowers to the Wright family.