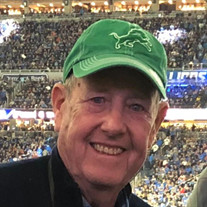 William H. Snider of Cadillac passed away April 17, 2022 at home. He was 89. Bill was born June 7, 1932 in Cadillac to Vern A. and Evelyn V. (Williams) Snider. He graduated from Cadillac High School in 1950 and then served honorably in the United State Navy for four years. On December 26, 1952 at Saint Ann Catholic Church in Cadillac he married Marilyn L. Corwin and they were fortunate to have 69 years together. Bill went on to earn his bachelor’s and later his master’s degrees from Central Michigan University. Bill spent 26 years in the field of education teaching and in an administrative role. During his time in education Bill also coached middle school, junior varsity and varsity basketball. Bill was a loving and supportive husband, father, grandfather and great-grandfather. He not only instilled the value of family into his children but modeled it as well. Bill enjoyed watching and attending games and events of his children, grandchildren and great-grandchildren. Along with his love of basketball was football; he was a devoted Detroit Lions fan. One of the most memorable football games Bill attended was the Detroit Lions Thanksgiving Day 2020 game with the four generations of his family. Bill enjoyed spending time outdoors hunting and fishing and maintaining their property. Even after his years of teaching the industrial arts class Bill still enjoyed working in his shop on different projects. He was thankful for his friendships over the years with Maynard Thompson, Dean Patterson and Bob Rhode. He is survived by his wife, Marilyn their children: Bill Snider of Ludington and Betsy (Russ) Snider of Sedona, Arizona; grandchildren: Billy (Jessica) Snider, Brian (Catherine) Snider, Brett (Brittany) Snider, Bridget Snider; great-grandchildren: Grant, Finn and Drew. He was preceded in death by his parents and a sister, Patricia Snider. In accordance with Bill’s wishes cremation has taken place. An online guestbook is available at www.petersonfh.com.

William H. Snider of Cadillac passed away April 17, 2022 at home. He was 89. Bill was born June 7, 1932 in Cadillac to Vern A. and Evelyn V. (Williams) Snider. He graduated from Cadillac High School in 1950 and then served honorably in the... View Obituary & Service Information

The family of William H. Snider created this Life Tributes page to make it easy to share your memories.

Send flowers to the Snider family.